The best and most powerful captive bolt pistols for stunning before slaughtering in abattoirs. For pigs, cattle, sheep, goats and horses. Wide range of cartridges appropriate for different weight ranges of the animals, to ensure the optimal functioning of the captive bolt pistol. We will advise you regarding your purchase.

What is a Cash stunner?

A Cash stunner is a tool for stunning animals at abattoirs before their slaughter (bleeding). Thanks to its use, the animals become unconscious immediately and irreversibly, being insensitive to pain before their bleeding. In this way we remove stress and suffering, and the meat quality and yield improve. It is especially useful in automated production lines, because it allows to stun animals at a high pace.

The CASH Special stunners range consists of conventional captive bolt pistols that are powered by cartridges and are trigger-fired. They are available in two formats: penetrating (CASH Special) and concussion-causing (CASH Special Concussion).

The CASH Special Concussion tools are suitable for ritual slaughter. The use of these tools is exclusively professional.

What animal species is the Cash stunner suitable for?

It is recommended for pig, cattle, ovine, caprine and horse abattoirs. It can also be used for fowl.

Performance of the Cash pistols

They can process up to 450 animals per hour by planning the activity using 2 or more Cash stunners alternatively.

What effect does a Cash stunning pistol cause?

The Cash stunner leaves the animal insensitive to pain, so it removes the stress and suffering of the animal at the abattoir, and therefore we improve the meat yield and quality, besides facilitating the handling of the animals. It also allows to fulfil the animal welfare regulations.

Tool designed for stunning animals at abattoirs before bleeding them or for depopulation purposes pursuant to Regulation (EC) No. 1099/2009 on the protection of animals at the time of killing.

Only in the EU: these concussion tools (without a penetrating captive bolt) shall only be used in ruminant weighing < 10 kg LW.

What cartridges do I need for the Cash stunning pistol?

Each animal species needs an appropriate cartridge, according to their weight, to obtain the expected result.

How is the Cash stunning pistol used?

Pull the hammer. The hammer will produce a sound («CLICK») when it fits in its place and will remain open.

Pull the firing block. The firing block will produce a sound («CLICK») when it fits in its place and will remain open as shown in the image. 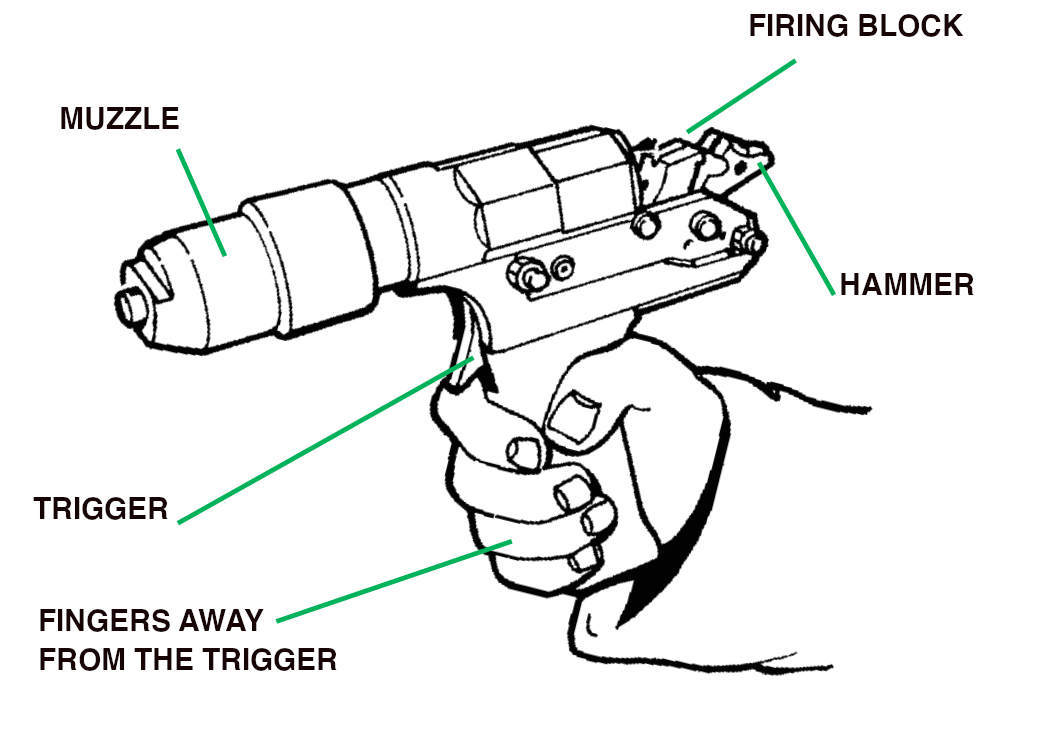 Take a single cartridge and introduce it in the chamber, inserting the curled end first, as shown in the image. 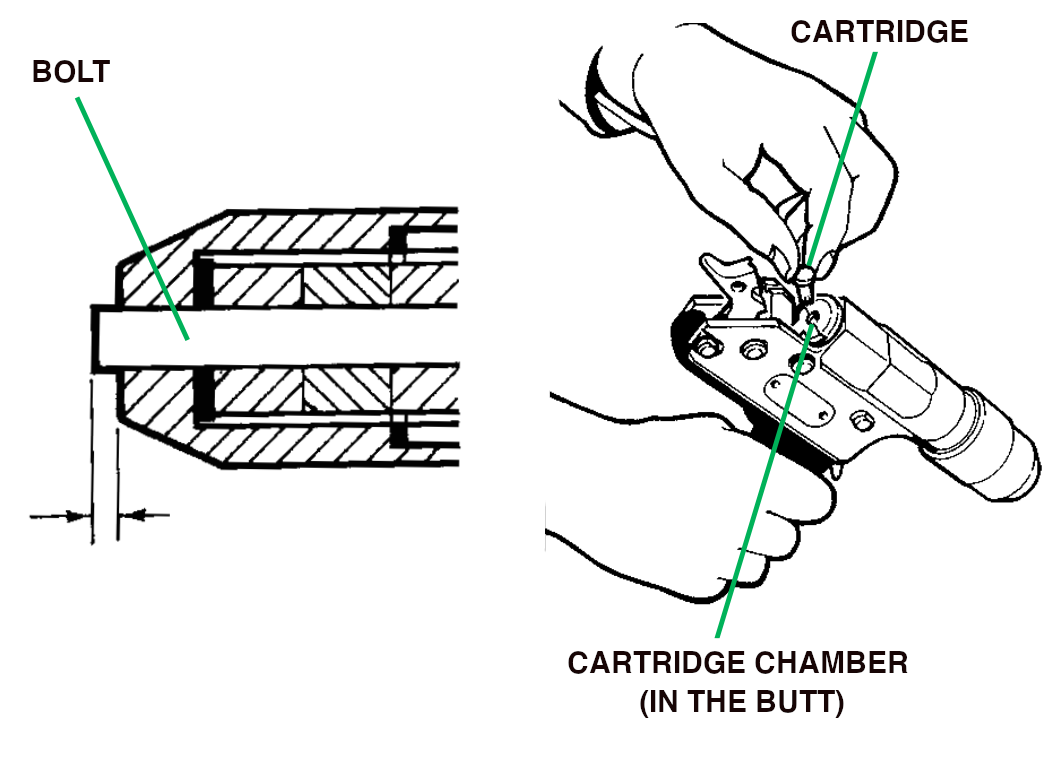 3 GET READY TO SHOOT

With the pistol aimed opposite from you, push the firing block forward so it comes into contact with the chamber surface, as shown in the image.
The gun is now cocked and ready to be shot. 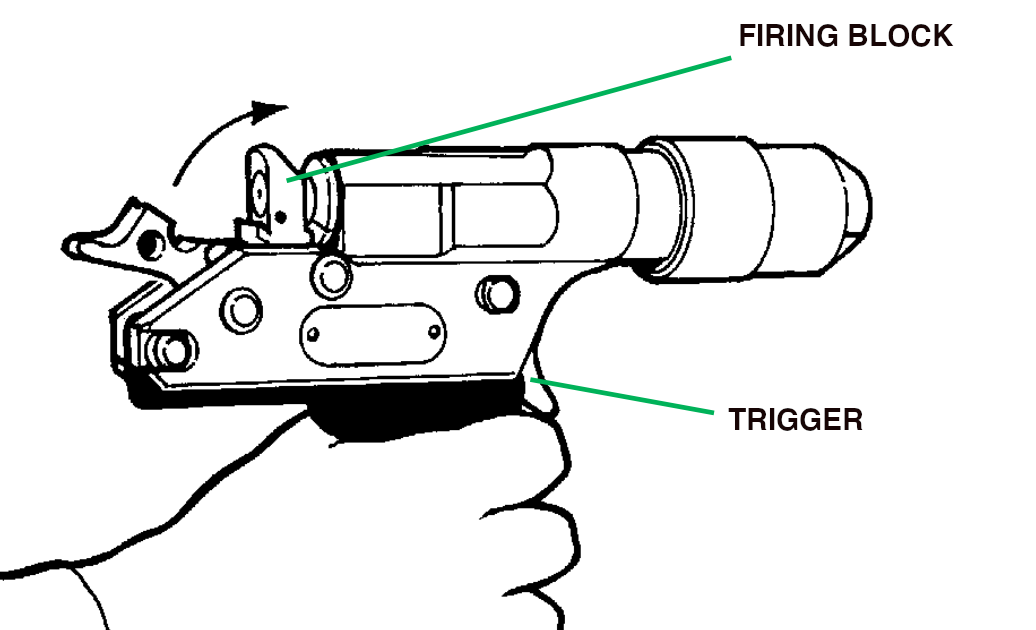 Place the tip of the muzzle in the correct position on the head of the animal to be slaughtered, and when it comes into contact with it shoot at once by pulling the trigger, therefore stunning the animal. 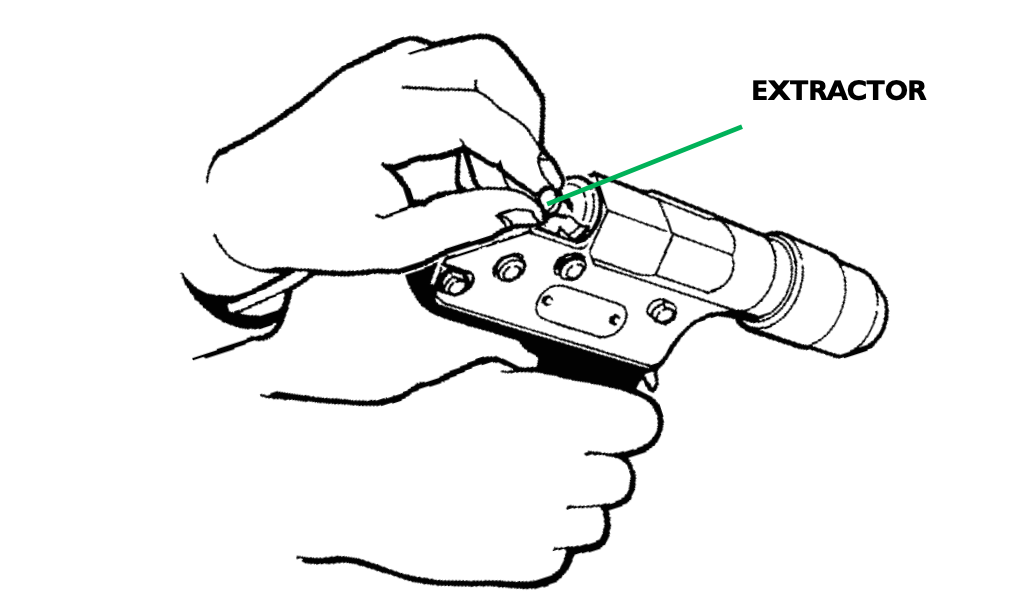 Correct position for stunning an animal

The position for stunning a pig must be on its front, just above the eye line (see the image).
The effective stunning signs are:
- Immediate collapse
- Absence of rhythmic breathing
- Absence of corneal reflex
- Relaxed jaw
- The tongue hangs

The position for stunning sheep and goats will be on the top of their head, with a slight inclination following on the line that
The effective stunning signs are:
● Immediate collapse
● Absence of rhythmic breathing
● Absence of corneal reflex
● Relaxed jaw
● The tongue hangs

The position for stunning cattle shall be on the front, above the eyes, on the intersection of the lines that join the right eye with the left horn and the left eye with the right horn (see the image).
The effective stunning signs are:
● Immediate collapse
● Absence of rhythmic breathing
● Absence of corneal reflex
● Relaxed jaw
● The tongue hangs

To install this Web App in your iPhone/iPad press

and then Add to Home Screen.